When I first heard of Leavenworth in Washington State, I was an active outdoors-man exploring the world.  I came across a comment and a page describing Leavenworth while looking for new rock-climbing grounds.

It was certainly entertaining.

Leavenworth was described as a unique town by the author who’s auntie thought it was the “bee’s knees” because it was so quaint! The article went on to describe the incredible rock climbing routes that one would learn about from the local knowledge store “Der Sportsman”.

I filed all this away and planned on a future trip to this mecca of rock climbing in the heart of Washington State..

Time goes by and out of the blue an opportunity arose for me to change my job path.  The great irony is that all this time I had been competing with a business in this little town in the foothills of the Cascade Mountains.  They offered me a position and I became a staunch supporter of the “bee’s knees” for the next fifteen years of my life.  Now, I have to say that these were some of the best and formative of my years.  Not only did I make new and glorious friends, I learned that I needed to completely revise my thinking about the outdoors and activities.  Everything was just a bit more… steep… in Leavenworth.

Somewhere among the many years of adventures with my friends from Das Rad Haus, Der Sportman, Uncle Ulie’s, Stevens Pass and Mission Ridge, the local chamber, and the Icicle Village Resort, as well as the hundreds of amazing people who make up the community and the incredible bond between them, this website was born.  It was born out of a bond of people who wanted to promote Washington State to tour operators and drive business to our tourist destinations.  Leavenworth being one of those.

Leavenworth is most commonly known as the Bavarian Village of Washington State.  It’s also been known as the “Bavarian Base-camp” and many other heartfelt monikers. To the millions of visitors who travel through Leavenworth each year it may be known as the place to find amazing food, wines, and really fun festivals. To the hard core adventurer who now has a family and kids and is looking for a really nice place to visit while being able to “indulge” in a little adventure while the family relaxes – He may still secretly think of it as the “Bee’s Knees”.

I hope that you enjoyed the video above. Over the years there have been many videos that have drawn international attention to Leavenworth. This one feels like it was really made for the people who call Leavenworth home. It captures the essence of a relaxed lifestyle in the midst of Washington’s beauty, while enjoying the culture that comes from being a Bavarian Village in the heart of Cascade foothills. 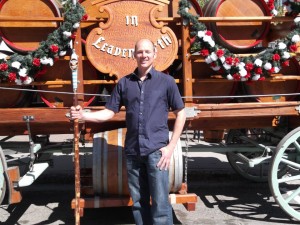