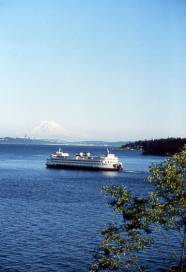 Once called the Great Peninsula, Kitsap Peninsula is surrounded by 236 miles of salt water shoreline and centrally located between the Olympic and Cascade Mountain ranges in the Puget Sound region of Washington State. The Kitsap Peninsula affords spectacular views of mountains and water from every vantage point and welcomes groups of all sizes to tour our unique and beautiful area. It is the largest of Washington State peninsulas.

The combination of Native American, Scandinavian, military and pioneer attractions all within a two-hour radius make Kitsap an easy-to-tour destination rich in history and diversity.

Less than an hour from Seattle, the Kitsap Peninsula is easily accessible from the greater Seattle area by four routes of the Washington State Ferry Service, from the west by the Hood Canal Bridge (the world’s longest floating bridge over tidal water), and by highway from the south. Every community on Kitsap is located on the waterfront.

From the 1850’s lumber mill town of Port Gamble (a National Historic Site) to Bainbridge Island with it’s quaint shopping district or the Smithsonian-lauded museum of the Suquamish Tribe and the gravesite of Chief Seattle at St. Peter’s Mission, on through the Norwegian town of Poulsbo on the shore of fjord-like Liberty Bay, to the settler’s log cabin museum in Port Orchard, Kitsap’s heritage abounds.

At Bremerton you can visit the Naval Museum, tour the destroyer Turner Joy, take a harbor cruise (from Port Orchard) of the Puget Sound Naval Shipyard or tour the growing number of galleries and arts related activities.

Everything for the gardener exists on the Peninsula, including full service nurseries, specialty nurseries and a number of display gardens to tour such as the Bloedel Estate and Heronswood, both featured on Martha Stewart Living, and an internationally known Bonsai Garden.

Nine State Parks can be found within the Kitsap Peninsula’s boundaries as well as 14 county and numerous city parks and playgrounds. Boat launches and scuba diving areas are nestled throughout and other sports such as kayaking, skate boarding, swimming, antique and mall shopping, beach combing, hiking, biking, or just relaxing and enjoying the view are readily available. Kitsap Peninsula restaurants offer delectable dining and once again, there’s that fabulous view.
Eleven golf courses include three of the ten top-ranked in Washington with two of those being ranked by Golf Digest in the Nation’s top 200 public courses.

Shopping is another plus with everything from galleries to craft shops, antiques, specialty shops, large chain stores and the up-to-the-minute Kitsap Mall.