This story, our story, is more than clichés and old world heritage. It is the story of world-class wine. A region already established, but still emerging. It’s characters are visionaries, people, and not brands. Individuals who challenge convention, collaborate, and don’t take themselves too seriously. It’s a story about passion, about being good stewards of the land and magical dirt. Sunlight that shines for days, and water snaking through pristine landscapes. These stories are real. Just beginning to emerge and find their voice.

But it’s not just our story. This story starts where all great stories begin. With you in mind. when was the last time that you stepped foot in a landscape sunny and warm, and were surrounded by vines, vibrant and alive. Or the time you shook hands with the winemaker, who after working all week as an engineer, returned to his winery, his passion, to poor his wine and share it with you.

The last bottle of wine that you opened – Did you know it’s story? Did you sit laughing, sharing a meal and recounting the first time you tasted the wine as the sun set against an endless sky? These stories are meant to be shared, experienced, meant to bring people together and unravel over time. These stories don’t happen in a far off place. They’re not fairy tales or set in stone. These stories start here in the state of Washington. – Washington State Wine Commission

Washington State wineries have gained an incredible reputation as one of the premier wine producing regions in the world.  The wines are repeatedly being noticed on the international wine scene with high-quality, elegant, and sought-after wines. While the wines are spectacular the wineries themselves often become the perfect locations weddings and other events. Many of the wineries also offer wine tours for enthusiasts who want to taste wine at the source. While many wineries are open for the public each day of the week, some have only specific days when visitors are welcome for tours and wine tastings. No trip to Washington would be complete without sampling local wines.

Fun note: In 1825, the first wine grapes were planted in Washington State near Fort Vancouver.

You should really take your research a step further than glancing at a Washington State wineries map for information. Here are just a few pointers to get you started.

Walla Walla  is considered by many wine connoisseurs to be the top wine destination in Washington. It has the perfect combination of vineyards, incredible wineries and tasting rooms, a good selection of restaurants and eateries, all in a quaint small town setting with accommodations and services.  Everything in Walla Walla is nestled pretty close together, making it easy to find your way around. Walla Walla is also home to the Walla Walla Sweets (named after the famous sweet onions that are harvested there), a summer collegiate baseball team that plays in the West Coast League .  Walla Walla has a rich history of wine-making that traces back to 1859, when one of the first grap nurseries was established by A.  B.  Roberts. Named one of the top ten wine regions worldwide, this scenic and world-class wine country has been shaped by distinctive micro-climates, abundant water from the Columbia river, and rich volcanic soil.

The Vineyards in the Walla Walla wine region span the boarder between Washington and Oregon.  Many of the vineyards that populate the region are controlled by large wine companies such as Chateau St.  Michelle who began planting wineries in the area in 1967. On the Wahluke Slope, one of the earliest established vineyards was Rosebud Vineyards, established in 1979.  Historically Walla Wall was wheat country, and while wheat is still a important crop, wineries and vineyards have grown in economic importance over the past three decades. Check out InquisiTours based in Walla Walla for wine tour ideas and packages. Phone: 503-358-9462

Western Washington is known for Seattle, the site of the World fair in 1962, also home to many sports teams from the Seattle Seahawks, and The Mariners. Taste Washington, Seattle’s premier wine and food event, reported its highest overall attendance in 2016; both in event participants, and also for participating restaurants and wineries. The 19th annual Taste Washington features more than 225 Washington State wineries pouring their favorite wines and more than 65 Northwest restaurants serving specially-prepared bites throughout two days.   Seattle wineries and tasting rooms are still the best kept secret treasure in the wine world.

The rapid expansion of  Washington state wineries has made Leavenworth a favorite destination for the wine novice and expert alike. Part of the Columbia Cascade Wine Region, you’ll find days of tasting and activities abound.

Most wineries in Yakima Valley are small, family operations with latitudes the same as the vineyards in France.

Woodinville is one of the best places for winery tours in Washington. Here resides Chateau Ste Michelle, Washington State’s oldest winery is surrounded by 105 wooded acres and unique craftsman-style architecture, acting as an oasis for everyone who visits.

There are also areas outside the official viticulture appellations that are awaiting official sanction, including the new Columbia Cascade Wine Region which includes part of Grant County, Douglas, Chelan, and Okanogan Counties.

Itineraries that include wine regions are: “White Wine and White Water”, “Northern Exposure”, “Higher and Dryer”

Washington’s Game-Changing Winemakers | Wine Enthusiast Magazine – Age is no issue for these four Washington winemakers, who are altering the landscape of northwestern wine. 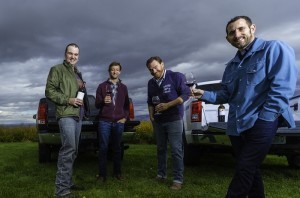