In 2001 John Morgan and Barbara House took the plunge and moved from Bellingham to the home they had begun building in Mazama in 1994. The move involved a career change for John who had been a civil engineer specializing in road and bridge construction in Whatcom County. It was the culmination of a path started when John’s father was a young man, collecting wines from Bordeaux, Burgundy and early producers in the Napa Valley. These wines were trotted out at family dinners over the ensuing decades, giving a glimpse into the alchemy of aged fine wines. The dream of the winery took form on Napa Valley’s Silverado trail where a laid back and friendly winemaker gave a glimpse of the typical people involved in the production side of the wine industry. 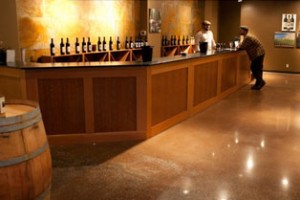 The more John looked into wine making as a possible career choice, the more he reasoned that if he could learn pre-stressed concrete design on his own, then maybe… After a commercial-scale test batch and coursework at U.C. Davis, we were off! John started the winery building design in January of 2002 with three feet of snow on the ground. By March we were chomping at the bit and snow was still falling. Six months later the requisite locks were in place to “protect the revenue” of the federal government. While talking on his cell phone to regulators, John waited in line at a truck scale with freshly harvested grapes on board, hoping to have the operating permit arrive at the winery before the grapes did. Turns out pre-stressed concrete design didn’t help much, however, all those years of working with permits and red tape sure did.

The final pieces of the puzzle fit into place with the arrival of Barb’s son Liam in April of 2004, fresh from the Connecticut restaurant industry, to head up sales and marketing at the winery. Being a native of the Olympic Peninsula, and an avid snowboarder and steelhead fisherman, we knew Liam wasn’t the East Coast type at heart. Nevertheless we were still glad to have him around more than just at crush time.