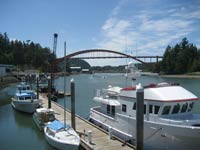 A Maritime Tour of Puget Sound

This tour itinerary is was designed to showcase Washington State to tour and travel professionals. It is an excellent example of some of the wonderful places and natural wonders of Washington that you can enjoy. The itinerary begins in Seattle and takes you through the nature attractions in Tacoma, Gig Harbor, Bremerton, Silverdale, Liberty Bay, Port Gamble, Port Townsend, LaConner, Mount Vernon,  Everett, Edmonds, and back into Seattle.

SEATTLE EXPERIENCE – Wednesday, October 8: At the conclusion of the FAM, continue your day by experiencing the best of Seattle. Board a deluxe Seattle coach for a city tour and visit to the Museum of Pop Culture at the Seattle Center. Then enjoy an afternoon cruise from Pier 56 to the wonders of Blake Island State Park and Tillicum Village.

Tillicum Village is located on Blake Island Marine State Park, eight miles off the coast of downtown Seattle’s central waterfront in Washington State.  Blake Island is believed to be the birthplace of Chief Seattle and became a state park in 1959.

MOUNT RANIER – Thursday, October 9: Take a leisurely day trip to what Native Americans referred to as “The Mountain that is God”, Mt. Rainier. Mt Rainier is the tallest volcano in the Cascade Range, has the single largest glacial system outside of Alaska, is the Nations fifth oldest National Park and continues to astound, impress and inspire its visitors. On your journey to Paradise located at 5,400 feet, you will travel through old growth forests, along rivers and into sub-alpine meadows all the while keeping a lookout for the abundant wildlife that are indigenous to the area, deer, elk, mountain lion and black bears.

VICTORIA, BC – Thursday, October 9 and Friday, October 10: Depart Pier 69 aboard the Victoria Clipper and cruise through Puget Sound to the charming city of Victoria. Enjoy a city tour and a stroll through world- famous Butchart Gardens and experience the tradition of High Tea at the Fairmont Empress Hotel. After a restful night’s accommodations at the Empress, Day two will feature shopping a visit to the Royal BC museum before returning to Seattle via the Victoria Clipper.

Thank you for reading this itinerary for the natural wonders of Washington! For more information about accommodations and travel planning please visit the contacts below.