In ancient Pacific Northwest Native American lore, Klickitat (Mt. Adams, 12,276 feet) battled with Wiyeast (Mt. Hood, 11.245 feet) for the hand of the beautiful maiden Loo wit (Mt. St. Helens, 8,366 feet). Klickitat and Wiyeast would battle by shooting great walls of flame miles into the sky. Finally, the gods sided with Klickitat by cleaving the earth and separating Wiyeast forever from Loo wit with Ncht Wana, the Columbia River. Explore this ancient volcanic land and include the queen of all Pacific Northwest volcanoes, Tahoma (Mt. Rainier, 14,411 feet).

The Cascades… is the name given to the chain of mountains that stretch from northern California to lower British Columbia. This adventure starts in Portland Oregon on the way to Mt. Hood. Here, take a guided hike on the Trillium Lake Interpretive Trail. The next day cross the Columbia river over “The Bridge of the Gods.” According to local lore, this narrow spot was where a giant natural span of the river was located, before it fell in. The natives used it to cross the river.

Once in Washington, visit two museums along the gorge, the Columbia Gorge Interpretive Center and the Mary Hill Museum of Art. Check into the 100 year old Carson Hotel and hot spring resort on the Wind River. Let the Carson bath attendants help you enjoy the spa, in the famed mineral baths in classic claw foot tubs.

Next, On to the Washington Volcanoes. Wind your way to a genuine ranch, under Mt. Adams, for views and a nature walk.

On the way to Mt. St. Helens, visit the Ape Caves Lava Tubes at Mount St. Helens and our guide will interpret the longest lava tube in the United States. Then we’ll head up the north side of the mountain for an up close look at the devastation levied upon the land when Mt. St. Helens famously blew it’s top in May of 1980. 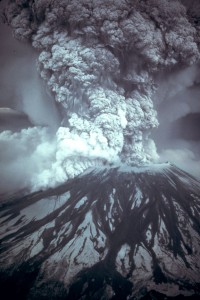